You had pain for a long time before you were diagnosed?

“I did. I’d had ultrasounds and colonoscopies and blood tests. Nothing. Finally, the pain got so bad that I went to Emergency. It was February 14th, Valentine’s Day. By midnight, they’d given me a CT scan and told me they were going to admit me. They knew what was wrong, but they weren’t telling us. The next morning, the surgeon came in – at six in the morning, because that’s when they’re free- and he woke me up. I had to ask. He looked down at me and said, “I’m almost certain you have colon cancer.” Three weeks later I had my surgery. For the next year I did chemo.

I’d do chemo on a Wednesday or Thursday, every two weeks. Then I’d go home with what I call the “baby bottle” – I’d be connected for two days. Three days later, I’d be out for the count for a couple of days, just so fatigued. So then you’re into the next week. You just start to feel better, and then you start it all over again. It just ravages your body.

Fourteen months into my chemo I got very sick. I was in the hospital for 17 of the 30 days in June. Lying in my hospital bed, I thought that’s it, the chemo’s stopped working and I’m dying. Your whole family, everybody who loves you, is watching this happen and everybody’s trying to keep a stiff upper lip. My husband was ready to sell everything we had and take me to the Mayo Clinic.
But my darling surgeon, he saved my life. He debated for two full days about doing a second surgery and decided not to. And eventually I got better.” 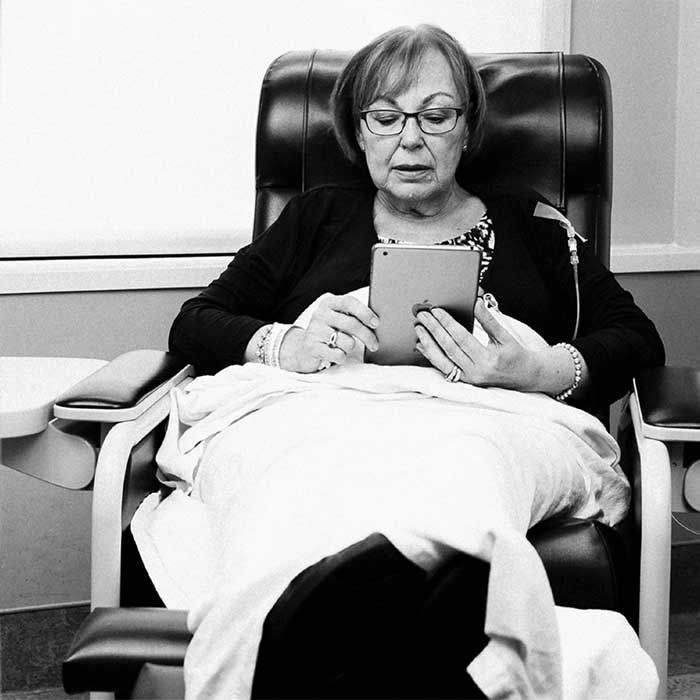 How did you make the decision to join the trial?

When I came out of the hospital, I said to my doctor, “What about that trial my husband found last year?

The chemo was palliative, anyway. It wasn’t going to work, we knew that from the beginning. When I first went on long-term disability from work, my sister came with me to the hospital to pick up the insurance paperwork. We got as far as the parking lot before we opened it. Make her “feel comfortable” were the words the oncologist had written, I think. We both burst into tears. I said, “This is not going to be me.”

When I went down to Princess Margaret and went through all the tests, they told me I was a match—which is to say, I had a cell mutation that was genetic. Only ten per cent of the world has it, and it makes your body turn on itself. So, lucky me, right?

They give you this document about the trial and the drug, probably 20 pages, that you’ve got to read before anything else can happen. And I mean, it scares the bejesus out of you. Because you read that two people had died. My husband is a lawyer, just retired. He read it and I read it, and we re-read it. He said, “You know, yes, two people died. But look at all the rest who are still here.”

What expectations did you have, if any?

I’ve got a friend whose mother just passed away at 92. Thirty years ago she was diagnosed with breast cancer and they told her to go home and put her affairs in order. But then they said we’ve got this drug called Tamoxifen, and would she be willing to go on a drug trial? She just passed away. At 92. Tamoxifen was the equivalent in her time: it was the last resort. Someone had to take it and try it. It may not have worked for every woman but it gave hope and treatment to a whole generation. My own options were not great. So, I thought, what do I have to lose?

When I met Lee-Anne, my clinical trials nurse, and Dr. Siu and Dr. Spreafico, they were all very upfront. How can I say it? The people I met are the people they are. On the drug trial they never promised me a rose garden. They never promised me anything other than, “you’re a good match, and let’s try.” They’ve been completely professional yet very empathetic at the same time.

I said to my sister, “I’m going to take this drug and see, and if I don’t come out of it, promise that you’re going to look after my kids.”

What happened after you signed the form?

I started on the treatment. For the first week, you’re seeing doctors every single day, okay? Every day. By Friday, I had a rash on my leg. I didn’t understand that the rash was a reaction to the drugs. They gave me a cream and they changed the medication dose immediately. Dr. Razak, who is the research doctor, called me first thing Saturday to follow up. The rash was gone. I felt better. Still, he wanted to examine me in person to make sure. He ended up working around my schedule and seeing me at 9am on Labour Day Sunday. That’s the kind of access you have to your doctors when you’re on one of these drugs. I’ve never had this kind of access to doctors. 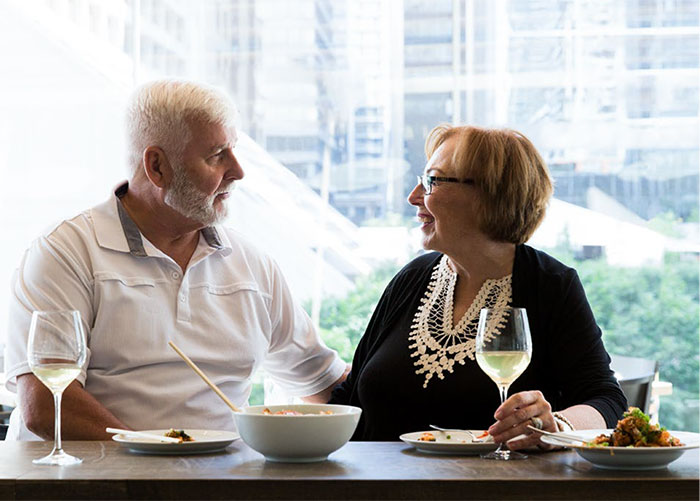 Every Tuesday I’m up and out the door by 5:30. We drive down to Princess Margaret and I have blood work done, and then I see the research doctor or Dr. Siu. Once my blood work is okay I go down and I have an infusion, which is only an hour. Every second week I also have a two-hour infusion of magnesium, so it’s a longer day for me. Every sixth week I have a CT scan so they know where this illness of mine is. I see an ophthalmologist every two or three months. I see a dermatologist every two or three months, because this drug can cause melanoma. They’ve taken off about six moles, of which one has had cancer. But they caught it.

So, Dr. Siu is my doctor but I also see her fellows, or if I have CT scan results, then it might be Dr. Razak or Dr. Spreafico. I do tend to see Dr. Siu more than most, but it could be any one of them depending on the week. No matter who it is, the attention and the understanding are there. They all know me and my trial and my health. Nothing is missed. They are a phenomenal group of people and we’re very lucky to have them. I don’t think we fully appreciate the hospital we’ve got here, right in Ontario.

So, Tuesdays Princess Margaret owns me, and other than that, nothing. I take two pills each day for the study. It’s a normal existence, really.

“Tuesdays Princess Margaret owns me, and other than that, nothing. It’s a normal existence, really.”

Have you had any other complications?

I’ve been lucky. I have not had any major side-effects. And it’s been two years that it’s worked for me. I would say to anyone: if the chemo is not working, or whatever they’re giving to you is not working, what have you got to lose? Maybe you’re going to help yourself. Maybe you’ll help somebody else, some mom or dad with small children. You don’t know. But someone has got to try.

A month ago now, I got my CT scan results. They said, “Janet, honestly we don’t know any more if you’ve got an active disease or not. The problem is if we stop, we don’t know what will happen.” They are very, very straight up. I think they are that way with most patients. Once you get into this kind of system, they check your expectations. Lillian has told me many times, “These drugs will eventually stop working. They always do.” If and when they do, I’ll do something else. I would try another drug trial. If chemo was my only option, I would try chemo again. And if there was nothing else, and I was in a lot of pain, I’d say it’s time for me to go. I’m very pragmatic. If you tell me how it is, I will deal with it. I don’t know why God dumped me on this journey, but he has. Sometimes I think it’s just to make somebody else feel good for five minutes when we’re in that hospital together.

Where do you go from here?

Since I started this trial, I’ve gotten two years that I shouldn’t have. That’s given me more time with my family. I’ve welcomed two beautiful grandchildren into this world and now we’ve got another one on the way. My husband Aleks, my rock, my constant source of strength…he and I both know what this time means. We see our kids as much as we can. We’ve managed to have two trips to Europe and to go south a couple of times. We make new memories every day.

I’ve been lucky that the drug company will maneuver around my schedule where they can. I’ve managed to do it with the help of Dr. Siu and her team. She’s got a phenomenal team. And we’ve been lucky. I don’t know why it worked for me. I don’t know, but it’s working. Maybe tomorrow it won’t, but right now it’s doing everything we need it to do, and I’ve got my quality of life back.