I am thrilled to introduce you to Dr. Annie Smith. I had the pleasure of meeting Annie Sunday, February 27, 2005 at 5:00 P.M. for the most overwhelming hour I have experienced in a very long while. Annie is our real life story!

Annie is a tall, angular, open, warm woman, with a smile that lights up her face and makes her blue eyes sparkle with delight. Her handshake is strong and her stance upright. We settled into her warm cozy home and her story began. For two decades Annie has been fighting cancer and while she was sharing with me her roller coaster ride I went from despair to hope back to despair. Along the way I learned about this wonderful lady, Annie, who had shared her story by writing a book to raise funds for ovarian cancer. The title of her book is: “Bearing Up with Cancer by Dr. Annie Smith – life, and living with…..” On the cover of her book is a photograph of Annie enjoying one of her favourite sports – sailing, and along for the ride is a ‘bear’…yup a ‘bear’! 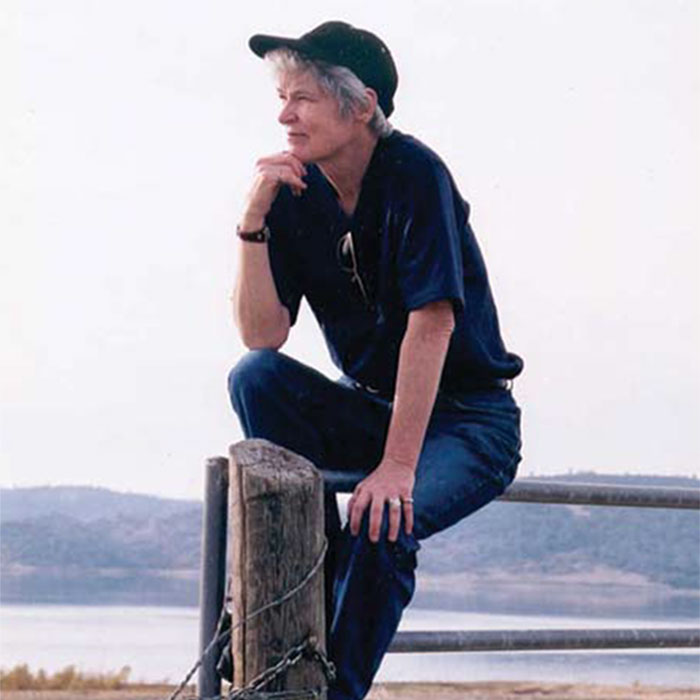 In Annie’s own words in the ‘Prologue’ of her book. “I’m not really a bear! I’m many things: an artist, a teacher, a doctor of philosophy, an author and lecturer, a sister and daughter, a friend and colleague, a tennis player and a sailor … and a woman who has lived with cancer for nearly two decades. I’ve been drawing my signature bear since childhood. Over the last three years, I’ve drawn it as a stand-in for me on my journey with this disease. The bear has expressed my pain and frustrations, my hopes and my joys. If you are also coping with this disease, I hope that it may be a comfort to you and your family and friends.”

I’m many things: an artist, a teacher, a doctor of philosophy, an author and lecturer, a sister and daughter, a friend and colleague, a tennis player and a sailor … and a woman who has lived with cancer for nearly two decades.

At the end of her book one is left with a sense of wonder at how Annie lived through all that she did. I will quote her last page, and then bring you up to date. Annie’s story is far from finished!

“Medical answers to our private questions about living and dying have to do with statistics. Along with so many others involved with cancer, I have had to listen to my share of bad news. But from the very first notices, I remember telling the physicians, ‘Someone has to be on the positive side of all those negative numbers. Someone has to be on the good side and it might as well be me!’ I have been saying that since 1984, when I first began to confront the cancer gremlins. Nearly two decades later, I know I can’t control the future, but I think I’ve defied the odds. More than anything, I know that I have truly lived each minute of the last nineteen years. I have truly lived with cancer – and that sure beats dying.”

Annie’s future looked bleak, the cancer tumours were now  concentrated in her lungs, and breathing was becoming difficult. Annie tried to keep up her tennis, and with supreme effort was able to chase down lobs, but was increasingly breathless and in more and more discomfort. Annie’s tennis partners tenderly protected her by hitting the ball directly to her. CT scans showed the bad news, but then it happened. Annie was given another chance at life! She qualified for a new study of drugs being tested at Princess Margaret Hospital, drugs that were developed by The Robert & Maggie Bras and Family New Drug Development Program, and away she went!

The first week Annie reacted badly to the drugs, and the consensus was to question her participation. Annie would have none of this and by the second week she was feeling a whole lot better. A second scan was done last week, and with the CBC cameras rolling, Dr.Amit Oza showed Annie the scans that revealed the amazing changes. Her cancer tumours were dying from the inside out! Only a small outer ring of white was left surrounding the dark interior. The tumour gremlins were being starved to death. They were dying and Annie was alive and breathing. The drugs were WORKING!

The tumour gremlins were being starved to death. They were dying and Annie was alive and breathing. The drugs were WORKING!

When I sat down with Annie to hear this marvelous story, she relayed that she had played a very hard game of tennis that morning. Annie’s friends were not about to give her a moments rest. Why should they? She was back in fitting form ready to do battle as she had done for two decades. Annie is at the beginning of this study – just barely two weeks into it, and will continue taking these new drugs just as long as needed and tolerated.

Keep going Annie – defy those odds. We’re all with you!