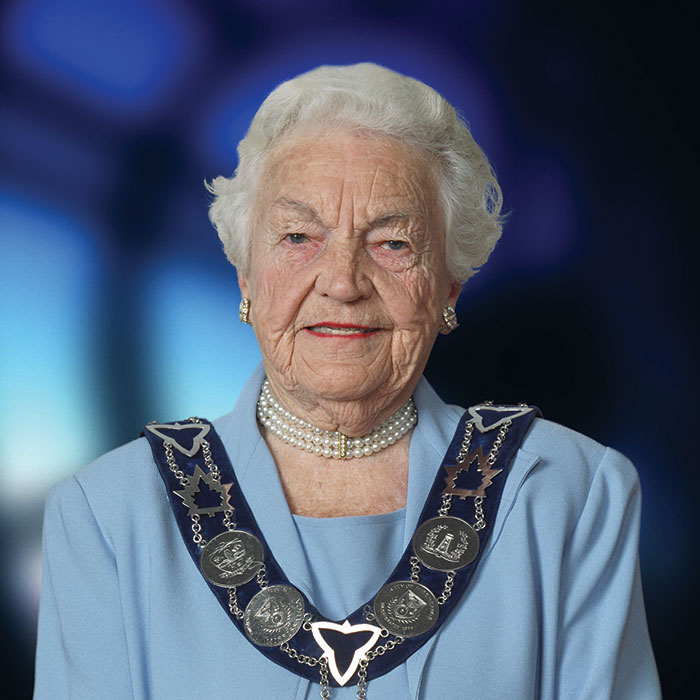 Hazel McCallion is a wife, mother, grandmother, friend, politician, businesswoman and former Mayor of Mississauga, Canada’s 6th largest city.  She was born February 14th, 1921 in the community of Port Daniel, Quebec on the Gaspe Coast.  Her father, Herbert Armand Journeaux owned a fishing and canning company.  Her mother, Amanda Maude Travers was a homemaker and ran the family farm.  Hazel was the youngest of two brothers and two sisters.

Hazel began her career in Montreal with the Canadian Kellogg Company.  She was transferred to Toronto in 1942 and in 1967 left the business world to devote her life to a career in politics.

Hazel McCallion became the 5th Mayor of Mississauga and was first elected in November 1978.  She is the longest-serving mayor in the city’s history, having served for 36 years at the time of her retirement in 2014.  She was a successful candidate in 12 municipal elections, having been acclaimed twice and re-elected 10 other times.  Her supporters gave her the nickname “Hurricane Hazel” because of her outspoken political style.

An example of her style took place in April 2006.  A police standoff involving a distraught man threatening to kill himself ended after five hours, when McCallion appeared on the scene and demanded he stand down, so that police, paramedic, and fire personnel could attend to more important matters, which he did!

There is much to be said about Hazel McCallion’s political career but on a more personal note, Hazel cares about the welfare of others.

In 2004 Hazel became Honorary Chair of The Robert & Maggie Bras and Family New Drug Development Program at Princess Margaret Cancer Centre.  A quote from Hazel in our 2008 newsletter:

“Orison Sweet Marden once said: “there is no medicine like hope, no incentive so great, and no tonic so powerful as expectation of something better tomorrow”, and hope is exactly what The Robert & Maggie Bras and Family New Drug Development Program offers to patients who are suffering from cancer.”

And another quote from Hazel which best describes her:

“It is every man’s obligation to put back into the world at least the equivalent of what he takes out of it.” – Albert Einstein.